The Secret Healing Powers of the Smiley Emoticon 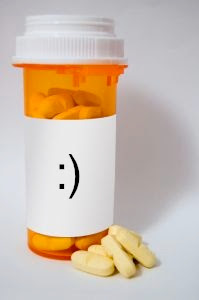 
Folks, the executives in the medical industry have invested tens of trillions of dollars to keep hidden the secret I'm about to reveal. Why? Because they hate you! It's not even about the money. They are just sadistic, power-hungry vampires that feed on your sickness and rejoice in your misery. Plus they worship Satan.

Already, I can sense your skepticism. You're thinking to yourself, "Sure, another fad diet - or vitamin - or South American berry used for centuries by Incan witch doctors to cure shortness".

Believe me, I understand your hesitance. How could there be one single all-encompassing cure for everything from acne to decapitation - a proverbial "fountain of youth" that has eluded every person on this planet for millennia? I mean, what are the odds right?

I had those same thoughts and feelings, until I learned that this cure is actually based in science!

See, the human body is made up of hundreds upon hundreds of tiny particles called atoms. When we get sick, or grow old, or lose a limb, the atoms that make up our body become configured differently than when we were healthy, young, and fully-intact. If, say, you were to use an electron microscope to compare the arrangement of atoms in the body of Olympic athlete Michael Phelps with those found in the mortal remains of King Tutankhamen, you would find marked differences.

So now you're thinking, "OK, my atoms are all screwed up, but what can I do about it?"

Well, first off, you won't find the answer in some high-priced drug developed by the pharmaceutical industry to pad the pockets of it's CEOs. No, taking pills won't fix your atoms. The only way to get your atoms to reorganize in a beneficial way is by staring at a smiley emoticon for 15 seconds each day.

How does it work? It's simple. Like the atoms in your body, the characters on a keyboard are building blocks. A right parenthesis symbol by itself is fairly meaningless, as is an unaffiliated colon. However, put the two together correctly and you have a simple and pure representation of happiness.

When you stare at a correctly constructed smiley emoticon, your brain recognizes the benefits of properly configured base components and begins to search out and rearrange incorrectly organized atoms in your own body.

But don't take my word for it. In just moments you can begin to experience the benefits of this revolutionary cure for yourself. Simply stare at the emoticon below for 15 seconds and then, based on your results, read the corresponding explanation of what has happened within your body.

Now, how do you feel?

I feel better already!
Great! This is to be expected. Your brain has begun the process of correctly configuring your atoms.

I feel worse!
Great! This is to be expected. Your atoms have been misaligned for so long that dust has gathered on them and they must go through a cleansing process before they can be arranged properly. This cleansing causes your symptoms to worsen, but rest assured knowing you will soon be healthier than ever.

I feel exactly the same!
Great! This is to be expected. The fact that your symptoms have remained consistent proves that you were about to take a turn for the worse. Had you not taken the first steps of atom correction now... well, let's just say it's a good thing you did.

I don't feel better, worse, or the same!
Double great! Your atoms have become so perfectly aligned that you are now able to perceive a condition within yourself that can only exist on an alternate plane of reality.

I seriously for real couldn't stare at that emoticon for 15 seconds without cracking up.

Wahoo!! On my way to a better life!